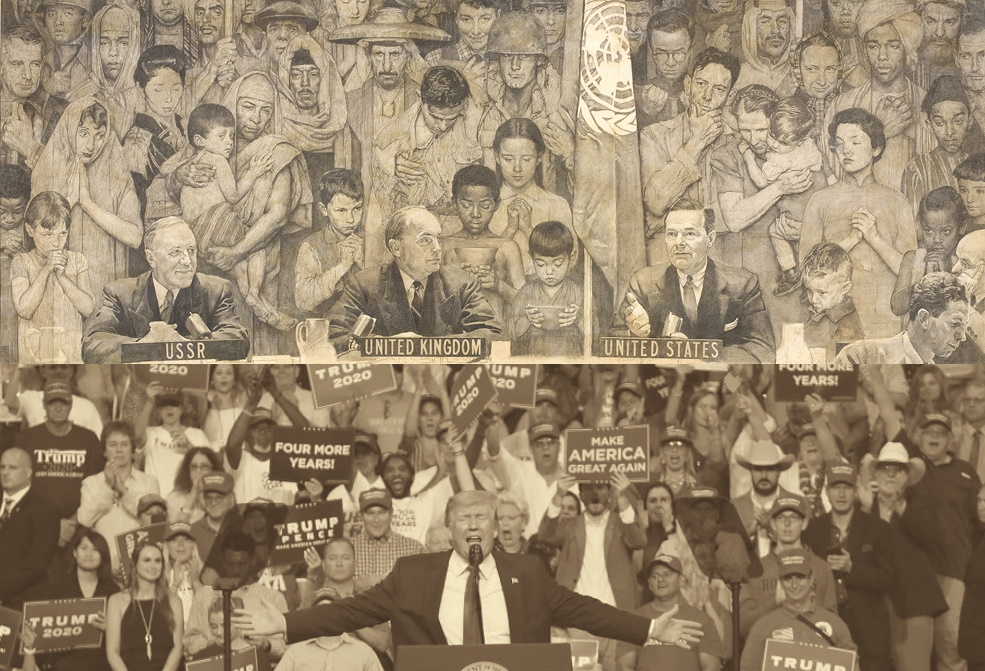 Yesterday, the president Tweeted about four congresspeople in a way that realistically can only be viewed as racist and white nationalist. It can be argued that he was just lashing out at criticism, but the fact that he chose the “go back to the country you came from” route for four U.S. citizens, instead of some other retort, reveals racist and white nationalist thinking. He started with the assumption that people of color aren’t from this country and have no place in it. I cannot find any other way to interpret his words and his intent.

Then, at a press conference today, he doubled-down, saying those congresspersons were “free to leave.” So are you, Mr. President. You are free to go back to Germany, where your family came from, if you don’t like that the right to disagree with a presidential administration extends to your own.

Also from the press conference, let there be no doubt about the racism and white nationalism part of this. “Asked if he was concerned that ‘people saw the tweet as racist, and that white nationalist groups are finding common cause with you on that point,’ Trump replied, ‘It doesn’t concern me because many people agree with me.'”

He’s talking about you, Trump supporters. He says you agree with racism and white nationalism and that’s okay. Well do you? He’s made the identification, and, while it is not fair, silence on the matter will be interpreted by Trump and everyone else as agreement. A lot of Trump supporters I have met keep telling me they aren’t racist. Now would be a good time to prove it.

Trump is often self-reflexive when he attacks others or defends his attacks. He accuses them of things or suggests things based, not on who they are, but who he is. When he insults, it is often an insult best applied to him. When he complains about how Democrats or businesses operate, it’s usually not because that’s how they operate, but rather that’s how he operates.

With that in mind, understand then what he is saying as he tries to defend his racist Tweets against four congresspeople of color. He has said that he didn’t tell them to leave (he did), but that he said if they didn’t like things, they could leave.

What he really is telling us is that he doesn’t like being in the White House or, possibly, this country. We should help him leave. After all, it’s what he really wants.

A recent poll showed an uptick in Republican support for Trump in the wake of his racist Tweets against four congresspeople of color. I had hoped for better. Just like after the alt-Right and racists lumped the rest of the Right in with them by calling their Charlottesville rally “Unite the Right”, what I get from the Right or Trump supporters is more defense of the persons doing the lumping in rather than a denouncement of the racists or their ideology or a distancing from the categorization that the Trump base also agrees with that ideology. It’s not a great look.

It is possible to support a president and still tell him that this time he crossed a line. But you have to bother to see that a line has been crossed, and clearly that’s not the case here.

The Reuters article discussing the poll also included this explanation:

This time, while Democrats and some independents may see clear signs of racial intolerance woven throughout Trump’s tweets, Republicans are hearing a different message, said Vincent Hutchings, a political science and African-American studies professor at the University of Michigan.

“To Republicans, Trump is simply saying: ‘Hey, if you don’t like America, you can leave,’ Hutchings said. “That is not at all controversial. If you already support Trump, then it’s very easy to interpret his comments that way.”

I don’t doubt that’s how Republicans justify this to themselves, just as the president has tried to justify it that way after the fact. But there are several problems with that justification.

The first is that IT ISN’T WHAT HE SAID. He did not tell them if they don’t like this place, they could leave. He first assumed they were foreigners, and then he asked why they didn’t go back to those countries. In other words, he strongly suggested they SHOULD leave, and specifically, he said they should GO BACK to where they came from, in an assumption they had to have come from other countries, not the U.S. and that the U.S. should not be considered their home.

Now three of the people in question were born in the U.S. and one has been here since she was a child and has been a citizen since her teens. But none of that should matter. The point is that his response to criticism was not “if you don’t like it, leave.” It was “you don’t belong here” which is utterly inappropriate to say to duly elected representatives of U.S. citizens.

Another problem is the assertion that it is uncontroversial or unoffensive to tell people if they don’t like America, they can leave. Let me explain something to you. It is 2019, not 1969. Trump was raised in that era, when such a phrase was a popular response to objectors to war and those pushing for social and governmental change. But he isn’t a president of an America in the 1960s or 1970s. He’s president in the 2010s.

We should, decades later, be better than this kind of sentiment. Because that sentiment still rests on the idea that objections to certain things in this country should be met with ejection. That’s a BS line of thinking. And if you think it’s so uncontroversial, let’s stop applying it to just the people of color or those who oppose war, and start applying it across the board.

Now it sounds pretty insulting doesn’t it. It is telling stakeholders with concerns that their concerns should just be ignored, and they should just go away and stop being a nuisance. It also includes a huge dollop of the assertion that those who complain aren’t really Americans.

The United States of America is not the same as it was in the 1780s, largely because people kept seeing issues with how things were going, and they what? Left the country? No, they changed it from within to meet the needs of the changing times and needs of the people. That’s part of how this whole thing works.

The First Amendment of the U.S. Constitution states: “Congress shall make no law … abridging the freedom of speech, or of the press; or the right of the people peaceably to assemble, and to petition the Government for a redress of grievances.”

Literally, the U.S. Constitution carved out people’s specific rights to object to how things are going in the country and to demand they be fixed. That is the complete opposite of “don’t like it, leave.” All Americans, including marginalized and minority groups, have the right to not like the country, stay, and demand better of it. They also have the right to elect representatives to Congress to work to push for those changes on their behalf, as has happened with the four congresspeople in question.

We are not supposed to be a nation of “yes” people. The president attacked four duly elected congresspersons by telling them opposition means they didn’t belong. In the process, he also made it clear the concerns of their constituents don’t matter. That’s dereliction of his duty as president. If you can’t see that, why? What makes the concerns of those constituents something to be cast aside? Is it because those constituents are minorities and thus don’t really matter? You know how that kind of thinking gets described, don’t you?

There is no question that “why don’t you go back to your own country” is racist. Even the EEOC guidelines about harmful work environments notes this. To chant it regarding a U.S. citizen, duly elected to Congress, is sick and wrong. Calling this behavior racist is an objective observation, not an opinion.

So I’m done trying to give anyone credit on this anymore. I hoped for distancing from the white nationalist label. Instead, we saw doubling-down. It’s thus fair to say that Trump supporters are all racists. That’s approximately 42.5% of the country that’s openly racist. Conservatives, those on the Right and Republicans are all racists. It’s up to them to prove otherwise at this point. Meanwhile, I’ll be in the corner crying for what we’ve become.

Dear members of the media,

You know that shocked, “can you believe it” reaction you had when you found out that Congress can’t call the president or his comments racist because of old parliamentary rules? That whole “how can you have a dialogue about something if you can’t use the right terms” thunderbolt you experienced?

That’s exactly how a lot of the audience reacted to those of you who assert that the press can’t call Trump’s objectively racist comments racist.

Now Republicans in the House, fearful of reelection chances, are all of a sudden concerned about the campaign rally chant inspired by the Trump’s recent racist Tweets. Yet only four of them could be bothered to officially condemn those Tweets, and most refrained from unofficially doing so.

Enough. Don’t distance yourselves from the mess you made. Fix it. Which means now you have to reprimand your followers, Republican party.

Stop wringing your hands Republican party, roll up your sleeves and get to work on reining in the autocrat in the White House whom you keep enabling and the devoted throngs of the Republican party who, in the wake of objectively observable racism from the president, decided to support him more.

This is your mess. Stop leaving the rest of the country to clean it up.

The “send her back” chant is going to be normalized, because the base already feels it has be given permission to be openly racist. So that train left the station before the rally even started. Trump will go to the next rally, the chant will start, and he will do nothing, because it’s a big “we love you” to him, as the narcissistic bully. Once it’s normalized, the Republican legislators will shrug their shoulders and stop caring because it no longer looks like it might mess up their reelection chances, except for a few people.

As expected, Trump has now walked back yesterday’s brief attempt to disavow the “send her back” chant at his rally, calling the crowd “Those are incredible people. Those are incredible patriots.” We’re all set for the chant to be a new slogan of Trump’s 2020 campaign. Normalization almost achieved, and I await confirmation that yesterday’s alarmed Republican politicians are no longer alarmed.

Ann Anderson is a contributing writer for Torchlight and, when time permits, for her own blog on social and political topics, Strigiforms.com. She has a familiarity with the legal profession, history, and an eclectic potpourri of informational tidbits. She can be reached at ann.anderson@torchlightmedia.net.

Ann Anderson
Ann Anderson is a contributing writer for Torchlight and, when time permits, for her own blog on social and political topics, Strigiforms.com. She has a familiarity with the legal profession, history, and an eclectic potpourri of informational tidbits. She can be reached at ann.anderson@torchlightmedia.net.