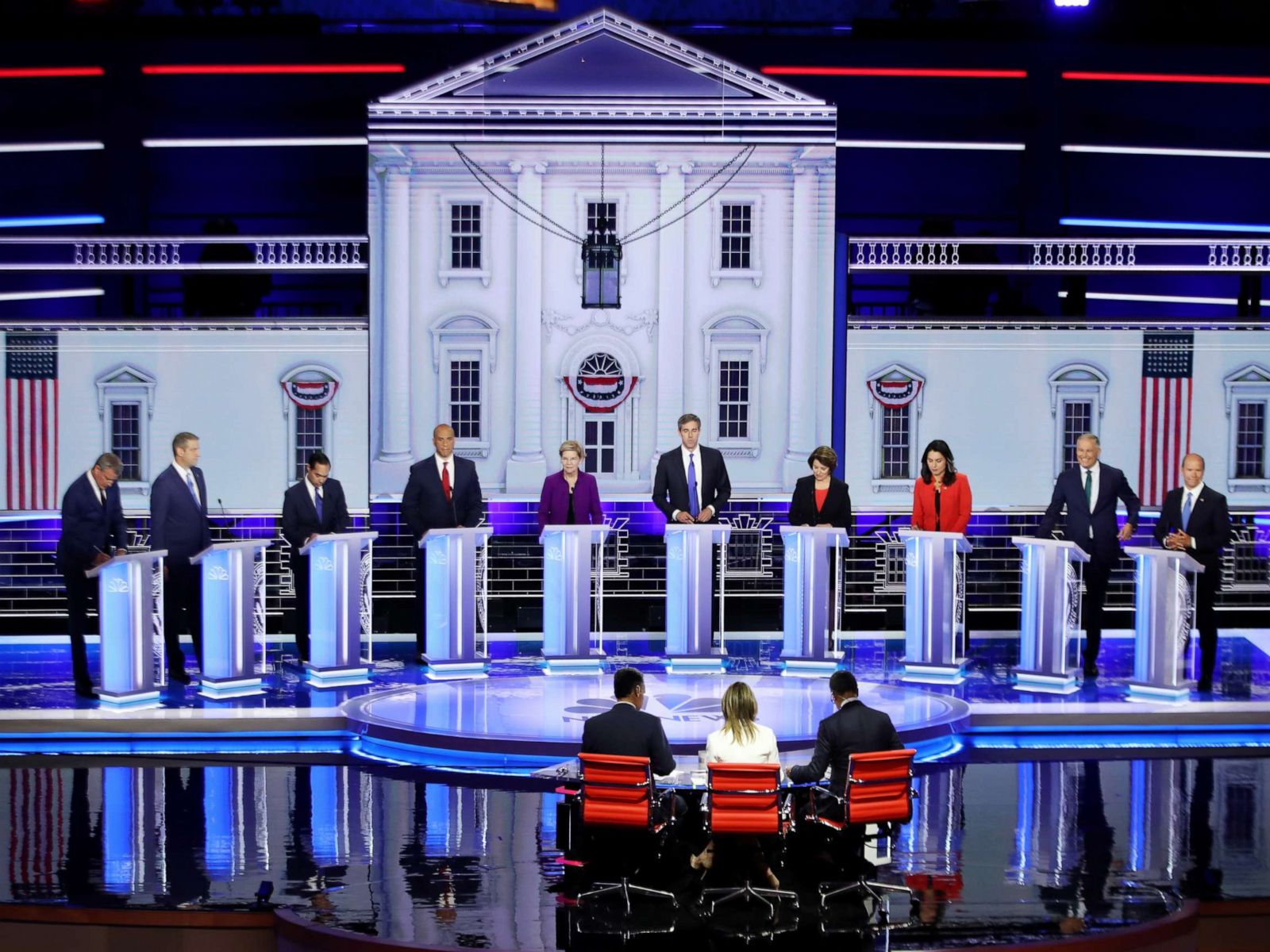 11 Debate Questions That Should Have Been Asked Last Night

The first of two debates this week for the Democratic 2020 presidential primary has concluded, but we at Torchlight believe that NBC’s moderators missed a few important areas of inquiry for the ten assembled candidates. Here are 11 questions we wish the debate participants had been asked:

1. “Senator Warren, you used to be a registered Republican. When did you change parties and what triggered that change?”

2. “Congressman Delaney, you’ve pointed to your business record as one reason you should be president. President Trump said the same thing in his 2016 campaign. Has Trump’s business record made him a good president, and why should we value yours more?”

3. “Secretary Castro, you have an identical twin brother, Congressman Joaquin Castro. Given the immense political and military power personally controlled by the president, if elected, would you be willing to undergo a procedure to tattoo or otherwise permanently and visibly mark your body so that in times of crisis America can always be certain which Castro brother is in command?”

4. “Senator Klobuchar, the plight of small children being detained in substandard conditions by Donald Trump’s administration reminds us that the true judge of a person’s character is how they behave toward those over whom they have power. Since it has been widely reported by credible news organizations that you have a reputation for badly mistreating your staff, what should we conclude from those reports about your character?”

5. “Representative Ryan, you’re known for practicing yoga, meditation, and mindfulness; you even wrote a book about it, titled A Mindful Nation, which encourages others to take up these practices. Yet you are also a Roman Catholic who has praised the Pope and at one time was pro-life, before your position evolved to being pro-choice. As a public figure, how do you decide when it is and isn’t acceptable to encourage others to embrace your spiritual beliefs?” 6. “Representative O’Rourke, your unique campaign style during your near-success Texas Senate run against Ted Cruz allowed voters an intimate window on many aspects of your life, including videos of you eating at the beloved Texas fast food chain Whataburger. Recent news of the chain’s acquisition by a Chicago bank filled many Texans with dismay, as they worried that the burger brand might lose sight of its home state origins. What’s your opinion of the potential downsides of a well-liked Texas enterprise attempting to expand nationally?”

7. “Governor Inslee, you’ve said that addressing the existential threat of climate change is your first priority. Assume for the moment that you truly believe that solving climate change is an absolute moral imperative beyond any other consideration, public or personal; and assume also that, given your polling, you are not going to win this race. If you were convinced that one of the candidates more likely to win took climate change as seriously as you do and had a plan equally likely to solve the problem, would you drop out and endorse them in order to help them win? What would convince you of their seriousness?”

8. “Senator Booker, you’ve discussed at length that you live in a low-income neighborhood where deadly violence is commonplace. Yet you clearly believe two things: first, that you are an important and valuable person, enough such that you should be a senator and potentially a president; second, that there is value in you living in your current neighborhood despite the risk of criminal violence to your person. However, you are running for president, and the President of the United States lives in the White House, an expensive fortress in an affluent neighborhood, and is surrounded at all times by armed guards. Are you and the work you do now or would do as President important enough that you should live in a safe place, or, if elected, would you reject Secret Service protection and maintain residence in a low-income, high crime area of DC?”

9. “Representative Gabbard, America exists today in a situation equally untenable and unprecedented: President Trump praises dictators and seems to humble himself before Vladimir Putin, often repeating the Russian leader’s opinions and making foreign policy decisions that benefit Russia more than they do the United States. As a teenager, you worked for an organization run by your father called Stop Supporting Homosexuality, a group that fought same-sex marriage and supported gay conversion therapy, but you now say you are pro-LGBT rights. In 2012, President Obama endorsed your Congressional run, but in 2015 you criticized Obama on Fox News for not using the phrase “radical Islamic terrorism.” In 2017 you met with Syrian dictator Bashar Al-Assad and subsequently repeated the conspiracy theory that Assad was not responsible for chemical attacks on his own people. Between your religious upbringing and evolution, your rise and fall in Democratic party politics, your military service and your apparent sympathy for a brutal dictator, how can the American people trust you as president not to be influenced by authority figures like Putin?”

10. “This next question is for all of the candidates except Senator Warren. The Democratic primary process accords delegates to candidates on a proportional basis, rather than winner take all. However, candidates must receive at least 15% of the vote in a state or district in order to be awarded delegates. Other than Senator Warren, each of you is polling well below 5% of the vote, making it likely that you will receive few, if any, delegates during this race. On the other hand, each of you has a sizable campaign staff and organization, as well as millions of dollars in funds. There are many crucial issues on which such an organization and such funding could make a difference, including shining public attention on the ICE immigrant detention concentration camps, not to mention helping Democrats win control of the House and Senate in the 2020 election. Could you better serve the nation by dropping out of the race now and devoting the rest of the time between now and the election to using your considerable resources and talent to make a difference on these issues, as compared to the dubious national benefit of yet another doomed presidential primary campaign?”

It is the fervent hope of Torchlight staff that NBC will ask more salient questions in the second debate tonight. If not, we shall have to publish another list of missed opportunities.

Kyu Saiewitz
Kyu Saiewitz (they/them) is the Founder and Senior Managing Editor of Torchlight Media. They also write and podcast about film and other pop culture at We Have Always Lived in the Kraken. A USC alum and screenwriter, Saiewitz currently lives in Austin, TX, where they own too many board games. Find them on Twitter @astaereth
381
Previous 2020 Dem Candidates on Climate Change
Next 11 More Debate Questions that Should Have Been Asked