Two Years On: The Trump Administration’s Erosion of LGBT+ Protections

I had hoped we wouldn’t be here. I cried all night long when Trump won on Election Night two years ago, and one of the tools with which I clawed my way out of despair was the belief that this country was too good to allow this. “Surely, this is a mistake,” I told myself. “Surely, we’ll figure out how to fix this.” Keith Olbermann told us Trump would be out of office in three months, maybe even behind bars. The investigations started coming, and the evidence kept rolling in, but still, here we are, two years into this nightmare assault on our moral fabric. While I continue to hold a strained hope for justice in the shape of Robert Mueller, we the people continue to endure the largest regressive attack on the civil rights of American citizens in living memory.

To think, it started here:

Thank you to the LGBT community! I will fight for you while Hillary brings in more people that will threaten your freedoms and beliefs.

June 14, 2016 – While I’m still not sure exactly who he’s thanking or for what, it’s important to have context here, since Trump saying, “I will fight for you,” is tied directly to his (as-yet unsuccessful) plan to ban Muslims from entry into the US. June 12th was the date of the Pulse shooting in Orlando, where a self-radicalized and natural-born American Muslim killed 49 people at a gay nightclub. This would set the tone for his campaign’s messaging on LGBT rights, as they would only be “protected” from the brown people that Trump vowed to keep out of the US. One week later, Trump accused opponent Hillary Clinton of not supporting the LGBT community by suggesting she took campaign money from the regressive regime in Saudi Arabia. While Saudis did donate to the Clinton Foundation (a non-profit that funds AIDS research and manages the Clinton Presidential Library), it was in years when Clinton was not in office; Trump would later be exposed to have deep financial ties to Saudi Arabia that enriched him personally, and may have influenced his mute response to the orchestrated murder of Saudi national and Washington Post journalist, Jamal Khashoggi, at the direction of Prince Mohammed bin Salman. 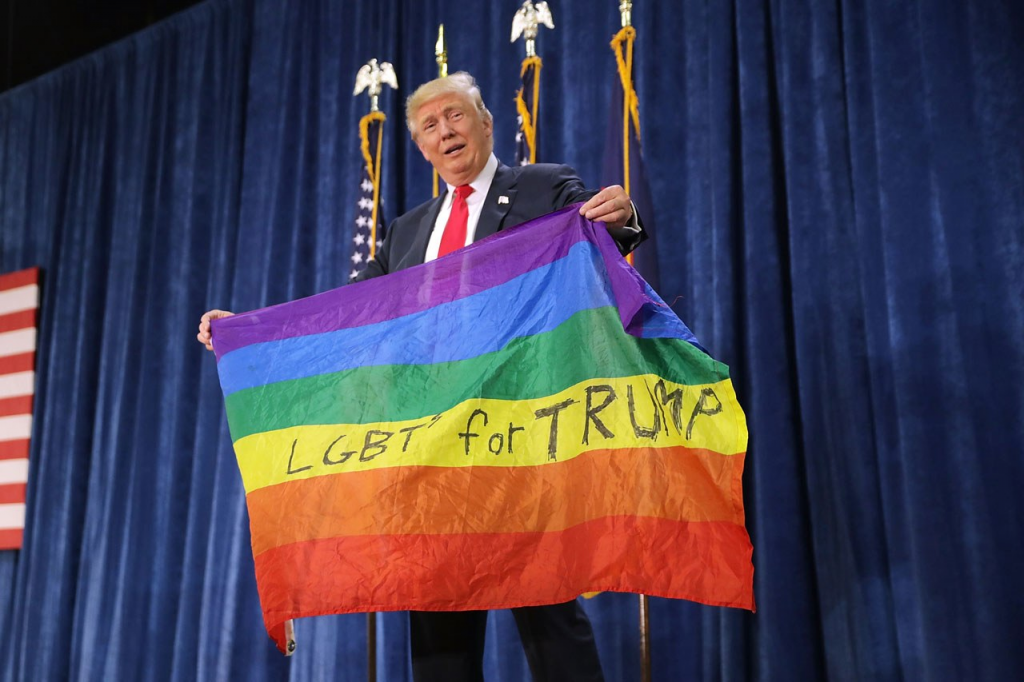 October 30, 2016 – At a rally stop in Ohio, Trump is handed a crumpled, upside-down Pride flag from someone in the audience. His surrogates and supporters in the media use this awkward unscripted moment to declare Trump “the most pro-LGBT candidate ever nominated,” despite Trump at that point making no concrete campaign statements about LGBT rights other than saying Caitlyn Jenner was free to use the women’s restrooms at Trump Tower. This would be the high point for Trump’s support of the queer community.

February 22, 2017 – Barely a month into his presidency, Trump’s Departments of Justice and Education (under AG Jeff Sessions and Secretary Betsy DeVos, respectively) rescind the Obama-era memo urging Title IX protections extended to transgender students. The case that would have decided the constitutionality of those protections, G. G. v. Gloucester County School Board, was removed from the Supreme Court’s schedule due to the administration’s reversal. The case has since been decided last May, in which the Eastern Federal District of Virginia ruled in favor the rights of the plaintiff, Gavin Grimm, stating that protections based on sex are required without specific Title IX delineation, as they are also under the protections of the 14th Amendment.

July 26, 2017 – Trump announces on Twitter, “the United States Government will not accept or allow Transgender individuals to serve in any capacity in the U.S. Military.” According to sources, Trump had not told any of his key military advisers of this, and there was no plan in place for the thousands of trans service members already serving. No actual plan would be provided until a month later, and while the measure was initially blocked by several federal lower courts, the following January the Supreme Court would lift that injunction to allow the ban to move forward until they could eventually hear the case. On the same day, the DOJ files a brief arguing that the Civil Rights Act of 1964 did not provide protections based on sexual preference or gender identity, arguing that discriminating against gay and transgender people should be seen as constitutional.

October 6, 2017 – Following filings and memos that defend the legality and constitutionality of Federal agencies discriminating against LGBT workers, the DOJ issues a memo arguing it to be legal for any employer to discriminate against them as long as there are religious objections.

December/January, 2018 – The Trump administration begins an onslaught against the healthcare of transgender Americans. During this period, the CDC is instructed to drop the word “transgender” from all official documents, as well as “diversity” and “evidence-based.” The Department of Health & Human Services opens a special Conscience and Religious Freedom Division to promote and defend the rights of healthcare workers who refused to treat patients whose existence go against their religious beliefs.

February 12, 2018 – The Department of Education abruptly announces it will no longer defend any complaints of student exclusion based on gender identity, arguing all matters should be left to local decision on case-by-case basis.

May 11, 2018 – The DOJ Bureau of Prisons rolls back Obama-era protections on housing inmates based on their gender identity, completely reversing the instruction and forcing opposite sex housing between transgender and cisgender populations. The DOJ also considers removing questions of sexual orientation and gender identity from their crime statistics gathering surveys.

November 23, 2018 – After previously removing language from their manual on contracted employees that protected against discrimination to LGBT staff, the Office of Personnel Management removes similar guidance from manuals pertaining to Federal employees, as well.

January 22, 2019 – In a 5-4 decision, the new far-right Supreme Court overturns a lower court injunction barring the implementation of Trump’s ban on transgender service members, which enforces the ban until verdicts are rendered in lower courts. The exact details on what this means for currently-serving trans soldiers is unclear, but it legalizes the barring of any new soldiers who admit to being transgender, as well as preventing current service members from transitioning while serving.

That brings us up to date, but still doesn’t cover many of the other stories being talked about and forthcoming policies rumored to be on the way; the New York Times reported just last October that the Department Health & Human Services is looking to essentially erase transgender people from statistical existence by defining gender as “immutable from birth.” The Department of Justice’s effort to have state-sanctioned sexual, domestic, and civil violence removed from amnesty considerations was blocked by a federal court injunction . The Department of Justice unsuccessfully attempted to remove questions about sexual preference and gender identity from the 2020 census.

It’s a sustained onslaught, and almost every day it seems like we’re hearing yet another way the administration continues to not just prop up older forms of bigotry, but also invent new ones while eroding the protections already put into place. Impeaching Trump is all well and good, but these aren’t all his ideas, and he didn’t do anything of this alone. It can’t be reiterated enough that as bad as he is, he’s just a symptom of a very ill, very broken party. Is there a bright side to this? Could it be worse?

It’s hard to say. Thankfully we have lower courts to mitigate the administration’s (typically unfocused and unoutlined) missives, but with the SCOTUS now being conservatively entrenched we’re left the resort of public pressure and the appeals process, and ultimately, hopes that the only halfway moderate conservative on the bench, Chief Justice John Roberts (a George W. Bush appointee), sides with rationality. It’s within Trump’s power to enforce or encourage even further restrictions for LGBT citizens, and in just two years he has effectively shown his belief where queer people of all ages and backgrounds belong in our society, only stopping short of criminalizing our existence (so far). He’s already made it easier to legally refuse us healthcare, housing, employment, and anything that can be construed to be done “on religious grounds,” and that has left this already highly-marginalized community in very poor standing, dependant largely upon the humanity of their state and local governments, which can vary wildly. Ultimately, anything more draconian, such as martial enforcement or internment, would require the cooperation of Congress and the military–the former of which is thankfully now out of Republican hands.

It stands to reason that had Trump not won, we wouldn’t be having this discussion right now. Hillary Clinton, whether by desire or political coercion, was a staunch ally of LGBT Americans in her 2016 presidential campaign (admittedly far more so than in her 2012 campaign), and the Democratic National Committee platform of that year had a dedicated section for LGBT policy goals:

Democrats applaud last year’s decision by the Supreme Court that recognized that LGBT people—like other Americans—have the right to marry the person they love. But there is still much work to be done. LGBT kids continue to be bullied at school, restaurants can refuse to serve transgender people, and same-sex couples are at risk of being evicted from their homes. That is unacceptable and must change. Democrats will fight for the continued development of sex discrimination law to cover LGBT people. We will also fight for comprehensive federal non-discrimination protections for all LGBT Americans, to guarantee equal rights in areas such as housing, employment, public accommodations, credit, jury service, education, and federal funding. We will oppose all state efforts to discriminate against LGBT individuals, including legislation that restricts the right to access public spaces. We support a progressive vision of religious freedom that respects pluralism and rejects the misuse of religion to discriminate. We will combat LGBT youth homelessness and improve school climates. We will support LGBT elders, ensure access to necessary health care, and protect LGBT people from violence—including ending the crisis of violence against transgender Americans. We will also promote LGBT human rights and ensure America’s foreign policy is inclusive of LGBT people around the world.

Many of these resolutions fly directly in the face of actions taken by this administration, but admittedly the DNC’s positions here are vague in terms of mechanics, specifics, and extents. Regardless, it couldn’t be more oppositional to what’s currently going on, as not only are Trump’s actions on this issue regressive ideologically, but also regressive in terms of gains already made. Until this administration, the United States had never explicitly taken civil rights away from groups after they’ve been given.

Many LGBT Americans are in a state of limbo right now, especially if they are federal employees or contractors, as their benefits, insurance, and even jobs themselves are only as protected as their supervisors want them to be, which puts labor relations for LGBT workers back more than 100 years. Erosion of unions and the empowering of “religiously conflicted” employers has made being queer in America a target for open discrimination. We desperately need those protections, because the ultimate goal for conservatives is complete disenfranchisement and–eventually–erasure: queer people who are too poor, too sick, and without stable housing are too busy and burdened to be their own voices for political change.

405
Previous Roundtable – Two Years In
Next Wasted Time: Trump and the Environment