Continuing our ongoing coverage of the labor market, the release of the December Employment Situation by the Bureau of Labor Statistics allows for a review of 2017 as a whole.  Overall 2017 was a positive year for employment, drawing unemployment to a historic low.

President Trump was quick to claim the employment growth this year as a personal accomplishment.  However, it’s pretty clear that this is simply a continuation of trends seen under President Obama once the job losses caused by the crash stopped after the stimulus took effect in mid-2009, as can be seen in this chart of the last 10 years of U-3 unemployment rate statistics from the Bureau of Labor Statistics. 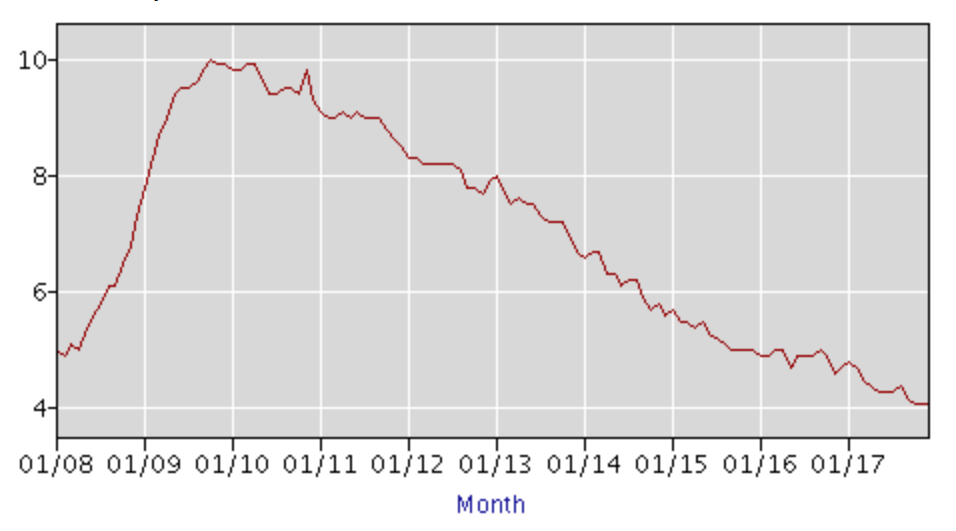 This is hardly surprising, as until President Trump signed the GOP tax bill at the end of December, he had made essentially no policies changes which might have been expected to meaningfully affect the economy, which means that employment has followed Obama-era trends out of inertia.

However, it is unlikely that the trend will continue unaltered.  With unemployment reaching historically low levels, we would at the very least expect things to level off, and presuming tight labor markets eventually translate into rising wages, the Federal Reserve will likely force the issue by raising interest rates to head off what would still be very low inflation.  How all of this will interact with the deficits created by the tax bill, which will tend to drive up interest rates in themselves since we’re at full employment, and the cumulative impact of the Trump administration’s general disregard for standard practices of good governance, which may result in anything from a trade war to a real war, is much hazier.  To put it simply, the employment picture in 2018 will be much more Trump’s creation than 2017 was.