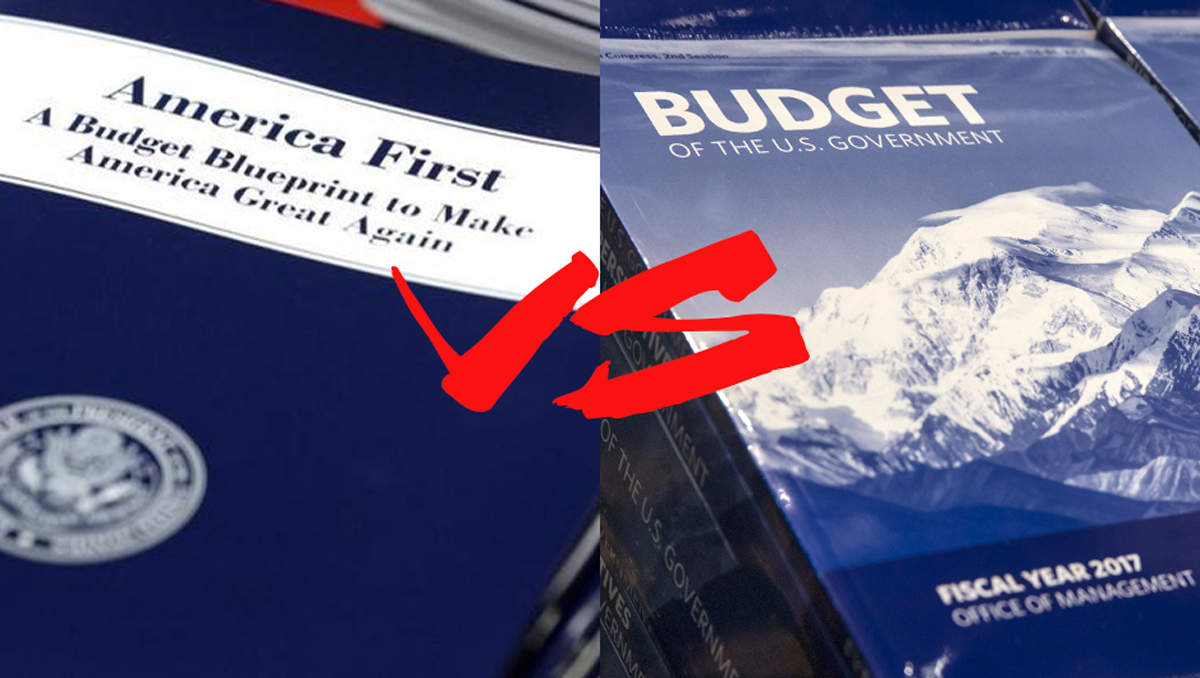 “I mean, this budget isn’t going anywhere, no budget does. It’s a dream, and as such ripe for interpretation and analysis. Comparing Obama’s dream to Trump’s may be very illuminating”

It’s easy to discuss the FY 2018 budget proposed by the Trump administration as if it existed in a vacuum, evaluating it as a unique object.  But it’s important to remember that one is cranked out every year by whatever administration is in power.  In a search for context we’ve decided to compare Trump’s budget to the last one of his predecessor.

The most obvious difference between the Obama and Trump budgets is simply one of scale.  Obama’s FY 2017 document is nearly 3 times as long as Trump’s.  This is partially a consequence of the style of each document.  Obama’s is at base a detailed policy document; it contains over 100 pages of narrative outlining dozens of new programs and reform initiatives, as well as specific cuts to programs identified as “lower priority” through ongoing government efficiency efforts.  Trump’s budget, in contrast, has the feel of a business presentation; there are only 21 pages of narrative, containing many broad statements of intent but few specific policies. 1.

The tone is where the more important differences between Obama’s and Trump’s budget visions lie.  Obama’s budget is about how the world can be improved. With sections addressing topics like “Securing the Digital Ecosystem”, “Helping Workers Who Lose Their Jobs and Reducing Job Loss”, “Improving Access to High-Quality, Affordable Early Education”, “Protecting and Increasing the Nation’s Water Supply Through Investment in Water Technology”, the budget is an unceasing flow of ideas for how to help American citizens and society.  They might or might not have worked, but the intention was clear.

In contrast, Trump’s budget is almost entirely about removing the federal government from fixing things.  The main document outlines almost no specific programs, not even formal expansions of existing “government efficiency” efforts.  The “Savings and Reforms” supplement to Trump’s budget outlines over 100 specific program eliminations and cuts.  Some of these, such as the “21st Century Community Learning Centers” 2, go so far as to cite research suggesting the programs simply don’t work, which should be acknowledged as somebody in the administration doing their homework.  Many of the cuts however, seem like bait-and-switch:

Regardless of the reasoning, many of the cuts are straight-out odious, such as eliminating $1.5 billion for the Green Climate Fund and Global Climate Change Initiative, but putting that aside, the budget as a whole presents not even a vision of transformed priorities, but one of simple retreat from action.  An aggressive but vague advocacy for expanded military and homeland security efforts is the only area of the budget which conveys a sense of mission, which simply highlights its absence in the rest.

The final point of contrast is that Obama’s numbers are plausible, while Trump’s simply aren’t.  First, Obama’s budget projects long-term economic growth at 2.3%. As can be seen in the chart below, this is a slightly optimistic but believable number given recent history; since 9/11 economic growth has rarely risen above 2.5%.

Trump’s budget explicitly appeals to discredited supply-side economic theories to justify a 3% growth rate for years.  Since Greenspan crushed inflationary expectations at the start of the Reagan era, growth in excess of 3% has only occurred outside of post-recession recoveries during the productivity boom in the Clinton era when the first wave of computerization hit.  Trump’s budget provides no explanation for how this level of output growth will be achieved 7 years straight except for the impact of tax cuts. 5

This all dovetails into the “double counting” that has been widely reported recently.  Trump’s budget explicitly calls out $2 trillion in deficit reduction due to economic growth, labeled as “Effect of economic feedback” 6.  But the projected Budget Receipts (i.e. tax revenues) 7 already factor in the effects of economic growth, so applying it a second time to directly reduce the deficit makes very little sense.

One final oddity is that while the budget narrative talks about reducing taxes, in particular the estate tax, Trump’s budget clearly calls for higher taxes, as at the end of the budget window the GDP share of Budget Receipts is 0.3% higher than they are in the first year (18.4% versus 18.1%).

In contrast to its predecessors, Trump’s budget feels as ill-fitted to the standard practices of the Presidency as the rest of his administration:  small-minded, hostile to Federal involvement in anything except the military and law enforcement, and unskilled in basic statecraft. If Presidential budgets are “a dream”, this one bespeaks an unpleasant dreamer.