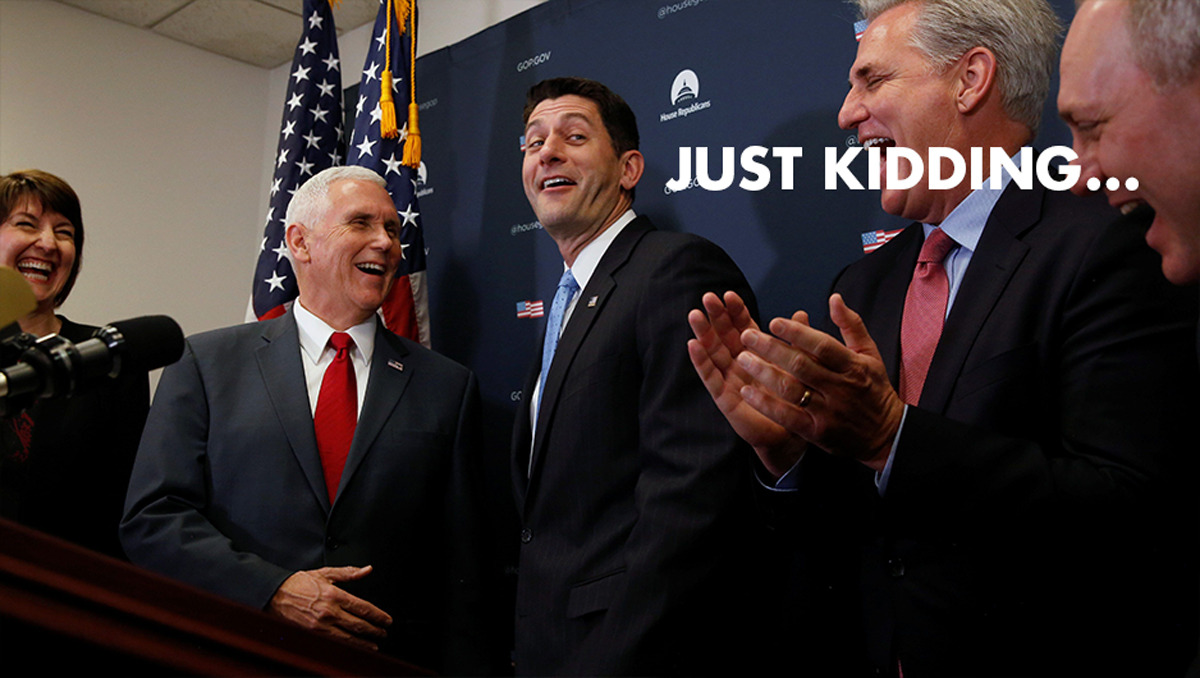 The Joke’s on the GOP

An infamously raunchy joke goes something like this: a person goes into a talent agent’s office and tries to sell a pitch about their act, which is described as an increasingly deranged, offensive, and vile series of thoroughly-depraved behaviors. After all this, the agent responds with, “Well, what do you call this act?”

“The Aristocrats!” is the reply.

It’s admittedly a bit of an atypical joke; the audience is bombarded with a sudden barrage of crude language and descriptions, only to have the setup subverted with a really silly and benign punchline. That’s the gag, though: putting a thoroughly inadequate positive spin on something absurdly reprehensible.

This week, House Majority Leader Kevin McCarthy (R-CA) and House Speaker Paul Ryan (R-WI) tried their hands at this routine when attempting to walk back comments made last year that recently came to light thanks to a recorded conversation which took place in Congress. Per the transcript, McCarthy can be heard saying that he thought (then candidate) Trump and Rep. Dana Rohrabacher (R-CA) were on the payroll of Russia’s Vladimir Putin: “There’s two people I think Putin pays: Rohrabacher and Trump.” The response to this was some laughing, following by Ryan’s insistence that no one speak of this out of a duty to “family,” referring to his fellow Republicans present. In the days since the release of the information, McCarthy and Ryan have been on the defensive, referring to the incident as a “bad joke.” On Wednesday, McCarthy went so far as to insinuate it was the public’s fault for lacking a sense of humor:

“You don’t have a sense of humor anymore? People aren’t supposed to be able to laugh? . . . There’s a reason why I’m not a comedian.”

Brendan Buck, a spokesperson for Speaker Ryan, similarly told reporters the exchange was just a joke:

“This entire year-old exchange was clearly an attempt at humor. No one believed the majority leader was seriously asserting that Donald Trump or any of our members were being paid by the Russians.”

There are a few problems with this tack, however. For one, it’s difficult to argue that McCarthy was joking. As the transcript clearly shows, this was a sober conversation about political dealings concerning Ukraine, Russia, and Crimea, and how Putin’s propaganda and espionage divisions were running rampant through the US and Europe, disrupting and undermining democracy. If McCarthy was was joking, it was the only joke in the whole conversation, and just because someone laughed doesn’t make what was said untrue.

As well, while Trump’s connections to Russia are (and continue to be) well-documented, the other politician mentioned alongside him is Rep. Rohrabacher, who has a disturbing fondness for Putin going back several years–so much so that in 2012 the FBI informed him of their concern that Russian spies were trying to recruit him. Since last year, Rohrabacher has made many public attempts to handwave away any fears that Americans might have regarding the former Soviet Union.

Speaker Ryan is leading the charge to remove whatever credibility legislative Republicans have left. His office tersely denied the Washington Post’s story regarding this conversation ever happening–until the transcripted recording surfaced–and only then acknowledged the story’s truth and changed to the joke explanation. In the last year, Ryan has also balked at or deflected nearly all questions regarding Trump’s multiplying scandals; from Trump’s feud with Gold Star families to the candidate’s sexist comments during debates, and from the Muslim ban to Comey’s firing, Ryan has played the role of Trump’s favorite unpaid spin doctor. Nobody asked him to do this, and plenty of party statesmen–such as John McCain and Lindsey Graham–have taken Trump to task for his positions and comments (even if they ultimately end up toeing the party line when voting). Ryan’s repeated and stalwart defenses are becoming increasingly inscrutable, especially as the party at large slowly begins the process of disavowing the president. Even more worrisome is Ryan’s taking up of the White House’s go-to response to politically-harmful leaks: stop snitching.

While Trump hasn’t yet given up on the phrase, “fake news,” it’s fair to wonder at what point the GOP will acknowledge how thin their flimsy defenses really are and start questioning why they’re needed, because at this point it’s seeming less like spin and more like concerted obstruction and obfuscation.

After weeks of confusing and dismissive behavior, Chairman of the House Intelligence Committee Devin Nunes (R-CA), was forced to recuse himself from the Russia investigation (and is now under an ethics investigation of his own) for what was apparently a secret attempt to discuss classified intel with the Trump Administration in order to aid their defense. Yet just this week Nunes was seen back at CIA headquarters reviewing files on Russian Intelligence–arguably violating any pretense of recusal–and then Friday went on Fox News to report that he still believed there was no connection between Trump and Russia. During the interview, Nunes cast himself in a heroic light by asserting he had been a whistleblower against Russia for years, stymied by the incompetence of the Obama Administration. This is patently untrue.

Violating recusals seems to be popular for Trump allies lately, as Attorney General Jeff Sessions’ letter urging the firing of FBI Director James Comey definitely puts him at odds with his prior commitment to stay away from the various Russia probes. In light of Trump’s nearly immediate and repeated remarks suggesting he fired Comey in an attempt to scrap his investigation, this also could make AG Sessions liable for obstruction of justice charges.

If nothing else, this continued pattern of dismissal, obfuscation, and interference signals all on its own that the parties involved may have something to hide. But the “it was all in jest” defense is an unacceptable attempt to justify the kind of unethical and reprehensible behavior that has become all too common in conservative circles. Moreover, if details of this investigation continue to drop bombshells as they have, the time when these desperate wave-offs will remain effective is coming to end. If Trump’s backers in Congress are called to testify–especially in a criminal investigation–a defense based on “It’s just a joke” or “It’s just locker room talk” isn’t likely to sway judicial opinion.

272
Previous The Order of Regression
Next How Special Is The Special Counsel, Anyway?