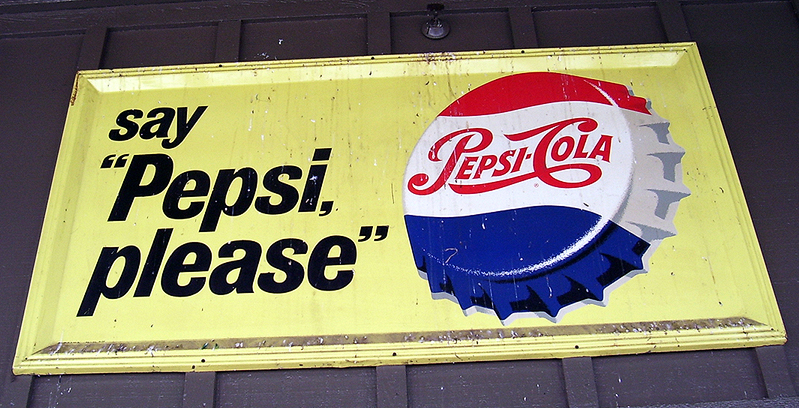 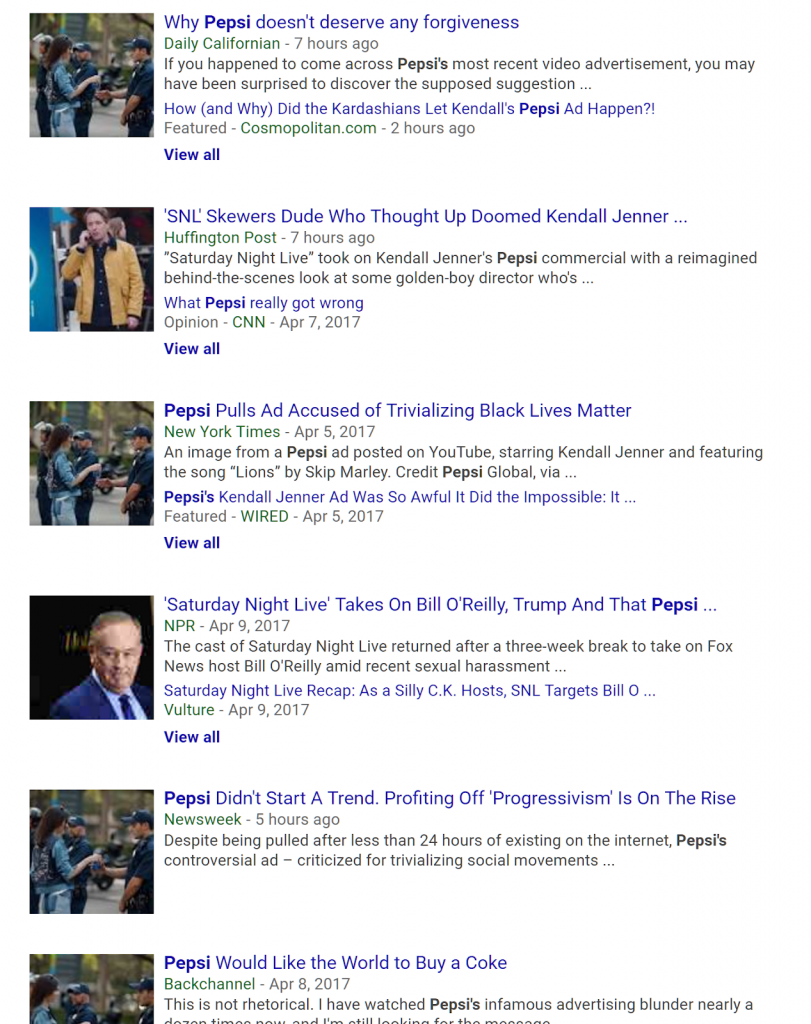 Maybe you haven’t seen the now-infamous ad that Pepsi, like a naive veterinary student, released unwittingly into the wild only to watch it be bloodily torn apart by the ravenous native fauna. Let me sum it up: millennial stereotypes live their hip urban lives millennial-ly, maintaining their progressive street cred by . . . um . . I’m not sure exactly. Hugging, I think. There’s an Asian kid with a cello. A woman in a hijab. A diverse collection of all ethnic groups and sexes and even a few gender-nonconforming people sprinkled in, and they’re all at some kind of march. I’m not sure what’s being protested, but the cops are there and they’re angry because that’s what cops do and are. Thank God, then, that Kendall Jenner is there to save the day. Whipping off her aryan wig and abandoning her photo shoot (millennials have the hardest jobs today, for real!), she takes front and center to lead this vague and aimless demonstration supporting the great American Nothingburger Society, culminating in Ms. Jenner, herself alone brave enough, confronting the line of police standing guard to execute the most tone-deaf homage to Flower Power known to mankind . . . and handing the officer a cold, refreshing Pepsi. After they share a drink, a common bond is forged, and the crowd erupts. Fade to copy. Good job, Pepsi, you just solved ten generations of disenfranchisement. 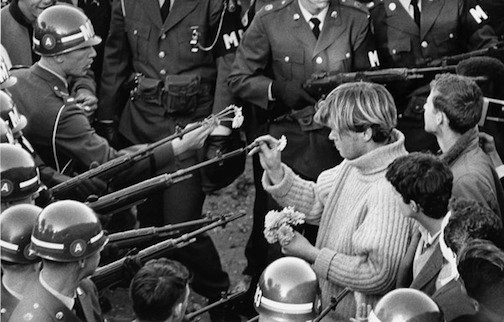 The real Flower Power photograph, seen above, was taken at a march on the Pentagon in 1967 protesting the Vietnam War. The young man in the photo with the flowers was George Harris, and only 18 years old at the time. Harris would go on to form a seminal drag performance troupe in San Francisco just a few years later, and unfortunately died not long after that; only fifteen years after this photo was taken, Harris would become an early casualty in the war against AIDS, dying from the disease before it even had its name.

People like George Harris rarely get mentioned in pop culture or the history books–I had to do my own research into him myself for this very article–but they really should, because these are the people who shape the future of America. Barely an adult in a country rife with internal conflict over our increasing role in Vietnam, Harris and the other students marching faced down military police pointing loaded weapons in their faces; the flowers put into the rifles typified the huge expanse in understanding and intent between the old guard and this new brand of progressive activism. George Harris was brave enough to face armed men with nothing but a bouquet of fuck-yous, brave enough to be openly gay in an era where being homosexual could land you actual jail time (the Stonewall Riots were less than two years away), and not only had the guts to go his own way and pave the way for LGBT performance art, but did almost all of it for free: George Harris believed that no one should profit from activism. Pepsi, it clearly seems, doesn’t agree.

Take a look at this: 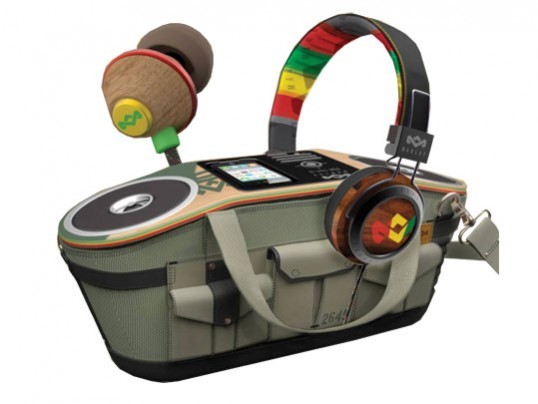 That’s a portable bluetooth speaker with an iPhone dock. It’s made by a company called The House of Marley, a business venture that sells portable music players and accessories through the heavy reliance on the name and imagery of legendary Jamaican reggae artist, Bob Marley. Several of Marley’s grandchildren are representatives for the merchandise, and while the website’s mission statement explains that they strive to provide quality products made of sustainable materials, there’s not really anywhere that clearly says what those materials actually are, where they come from, or where they’re made.

You will find, however, gratuitous use of common activist terminology on the website. They request your contact info in a field titled, “Join the Movement,” while their Instagram-esque gallery of products conspicuously laid out casually in hip millennial environs is called, “The Community.” The site even says in addition to (nebulously) supporting sustainability, they support the 1 Love charity, a “global movement . . . dedicated to supporting youth, planet and peace.” Problematically for them, when I clicked on the link at TheHouseOfMarley.com’s “About Us” page, I was redirected to a Squarespace 404 message. As well, all Google-Fu efforts on my part were hardpressed to actually find a single bit of evidence this charity has ever existed.

Bob Marley, himself, was a rastafarian and an anti-European Colonialist, who supported the enfranchisement of the descendants of the african slave trade diaspora. His final words allegedly were, “Money can’t buy life.” What he would have thought of his grandchildren selling the family name and his country’s heritage for a stake in a questionably-scrupulous headphones company based out of Michigan we’ll never know, but I bet I can guess.

We’re living in the post-irony age, the post-truth age, the post-awareness age, and we killed all those things by letting commerce define our political boundaries and redefine our historical context. Was Che Guevara a revolutionary or a murdering monster? I dunno, but here’s where you can buy his official keychain or belt buckles. The Soviets were a constant threat of nuclear annihilation, but they’re a lot less scary when they’re sexy Halloween costumes.

Yet, hundreds of prominent companies have been in the corporate activism game for years; this year’s Super Bowl ads were crammed full with political statements supporting everything from LGBT rights to immigration reform, and yes, some of them were a little craven and on-the-nose–like 84 Lumber’s commercial insinuating that they’d be handy if you need supplies for your exodus into a new country–but on the whole they were well-received by the public, and the key reason here is these companies were taking a firm stand on prominent issues. “Immigration reform is a big deal.” “Queer people deserve the same rights we all get.” “Racism is not cool at all.” This is where Pepsi really dropped the aluminum can: what the hell is their commercial with Kendall Jenner even about?

Is it about supporting LGBT rights? Is it about racism? Is it, as the end would suggest, a statement on police relations and #BlackLivesMatter? Is it about being true to yourself, a la, the way Ms. Jenner tosses off her outfit and rubs off her makeup? I mean, maybe, but taking your blonde wig off and fleeing your backbreaking job as a model doesn’t integrate you into an oppressed minority group as such, Kendall, hon; you’re still a super rich white girl from a super rich white family, and one of your moms is so deep in privilege she thought she could sell the Republican Party on the idea that being transgender is cool (spoiler: they weren’t buying).

It will always be incumbent upon us as private citizens to hold companies responsible when they attempt to hitch their wagon to causes; lip-service is a one-way ticket to working against your own aims, and faltering worse can be a public relations nightmare. If these companies are going to ride our goodwill to higher profits, we have to demand they put their money where their mouth is.