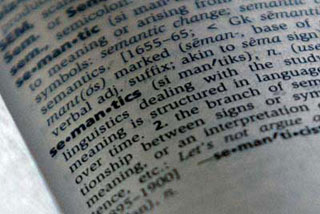 And that’s a week of Torchlight complete; thank you for joining us. Our writers have done some great work this week. Andrew Coleman took the media to task, laying out the terrain we want to inhabit as journalists. Amy Davidson brought us a sharp, compassionate look at the human impact of rescinding the transgender bathroom guidelines, while Jeremy Rosenlund reminded us that government cuts aren’t abstractions, but have measurable impacts on real people. David Schmitz did his homework and kept us up-to-speed on the President’s confirmations. Finally, our founder Josh Kyu Saiewitz did for the Republicans’ health care plan what we hope to do for everything we cover: laid out the facts and explained what they mean, as clearly as we can manage.

Great stuff, and I’m terribly proud of our writers. At the end of our first week, I wanted to step in and write about a topic that’s close to both my heart and the heart of the Torchlight project: the words we use, and how we use them.

Take, for example, transgender pronouns. Spend much time on the internet and you’re bound to encounter an image with the text “If I had an X for every gender there is” superimposed over a picture of two of X. These memes point toward the common refrains that the word “gender” is defined, that there are two genders, and that these definitions are long settled and in the dictionary.

Except that’s not the case at all; the language itself declines to participate. The Oxford Dictionary’s website notes that the use of “gender” to refer to people “did not become common until the mid 20th century.” Further investigation reveals that the term’s increased usage in that sense is the result of a scholar named John Money, who borrowed the “gender” from the study of language in order to describe masculinity and femininity without having to resort to biological sex. The notion that “gender” has some sort of enduring meaning is not merely false, it’s backward: using “gender” to refer to people became common explicitly to discuss these sorts of gray and fluid areas.

Words have meanings in the dictionary sense, and it’s important for us to understand those meanings in order to have some sort of starting ground to talk to one another; these meanings are called denotations. But words also have a host of other, broader, more contextual meanings, that can vary from situation to situation and speaker to speaker, and these connotations are just as important to meaning. Relying on a dictionary definition is a weak case in the face of a word that’s clearly being used in a different sense.

That said, your message is what you communicate, not what you intend: if I try to tell you something and you don’t understand what I’m saying, that’s as much my problem as it is yours. There is a natural tension in language between the speaker and the listener: between what I mean, the exact words I use, and how you understand them. My job is to use words that will communicate what I want, given what I know about you; your job is to make an effort to hear what I’m saying, given what you know about me. And it’s both of our job to strive for clarity when a misunderstanding occurs, rather than retreating to dull, pedantic arguments about definitions.

Examples of bad faith on both sides abound. Bad faith speech occurs when politicians and pundits lie, obfuscate, or choose the most egregious framing for an issue that they can manage. Similarly, bad faith listening occurs when context and complexity are set aside in favor of soundbites and simplicity. Good faith speech is hardly worthwhile if your listeners are going to misinterpret you anyway, and good faith listening is equally pointless if the speaker is a known fraud. We hope to be able to unpack some of these difficulties for you, both by paying close attention to what everyone else is saying, and by engaging in good faith speech and listening ourselves.

The writers of Torchlight, the editorial staff, and I all believe that language matters, and that despite the best efforts of propaganda, fake news, and other peddlers of misinformation, the diligent work of writers and readers can arrive at some shared notion of the truth. Our goal is to carefully and precisely articulate our understanding of the world for you, in the hopes you will find it engaging and enlightening. We hope that you’ll bend your brains to the good-faith effort to understand us, and let us know what you think about what we’ve written. You can get in touch with us at info@torchlightmedia.net.

680
Previous Without A Pot Or A Window
Next Civil Rights: Definitions and History